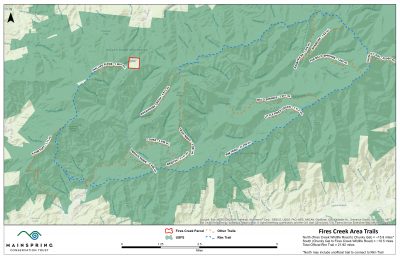 could lead to a happy ending for everyone.

Mainspring Conservation Trust, a regional land trust serving the six western-most counties in North Carolina, has entered into a contract with four landowners to purchase fifty acres in the Fires Creek watershed, that would eventually become part of the Nantahala National Forest. Mainspring is currently undergoing a campaign to raise the funds needed to purchase the property.

The 50-acre parcel is well known to many throughout western North Carolina. The owners, who acquired the inholding in 2006, drew public criticism from across the region when they petitioned the Forest Service for access to build a road to their land.

Michael Anderson, owner of Lot 3 of the Fires Creek property, says he and the other titleholders never intended the ownership to be so controversial. “Most of us grew up in this area, and, as little kids, we dreamed of owning the only private property in Fires Creek. Our intent was to have a place to grouse hunt and make memories with our families. The parcel was privately owned long before the Forest Service obtained the land around it and could have been sold to anyone. We never wanted that property to be anything but a place for us to get away.”

Anderson said he contacted Mainspring because the nonprofit understands private property rights, in addition to caring for the land. “We are interested in protecting the property, just like everyone else. I’ve been in conversations with (Mainspring Executive Director) Sharon Taylor for years about the potential to sell for conservation and, once all the owners were on board with divesting, Mainspring was open to additional discussions. We are glad the property will stay as pristine as it is now.”

Fires Creek is designated as an Outstanding Resource Water, the highest designation available in North Carolina. Over eighty-five percent of the property under contract is in the Fires Creek watershed, but it extends across the Valley River Mountains into Cherokee County.  The property previously contained more than a one third-mile of Fires Creek Rim Trail, but the popular hiking trail was rerouted by the Forest Service in 2013 to bypass the private land.

Taylor said she is excited Mainspring has an opportunity to conserve this important tract of land with its high conservation and recreation values.  “The landowners overcame a lot of obstacles to obtain the Special Use Permit needed to access their property. I’m extremely pleased that, even with the permit in place, they chose to give Mainspring an opportunity to raise the funds to purchase the property before proceeding with their original plans.  They’ve always been willing to talk to us about a conservation option, and I look forward to continuing the positive relationship we’ve built together over the past decade.”

Mainspring is in a campaign to raise $525,000 to close on the project before the end of the year. Sara Ruth Posey, Mainspring’s Hiwassee Program Manager based in the nonprofit’s Murphy office, is confident that community members, hiking groups and others who expressed interest in the protection of the property over the past ten years will contribute towards the acquisition.  “The community was very outspoken about saving the watershed, so I feel sure they’ll seize this opportunity to support this project that will not only protect the water quality of Fires Creek, but also allow for the Rim Trail to be reestablished so hikers can avoid the rugged rerouted section.”

People interested in protecting the Fires Creek watershed can support the project by clicking here, where they will then have an opportunity to designate their gift for the Fires Creek project.