You are here: Home / Events / Smoky Mountain News – Like a good neighbor: LTLT to clean up Duncan Oil site this winter 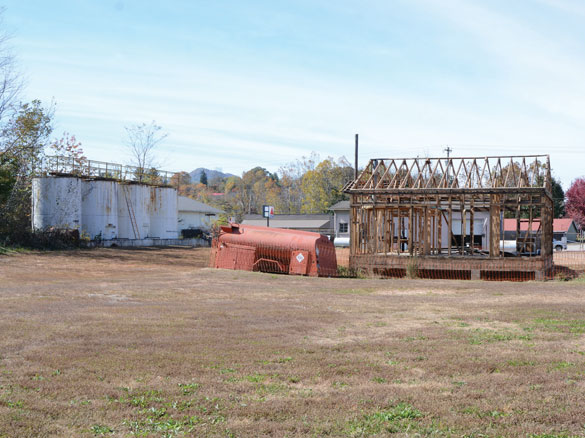 Thanks to some fortunate happenstance and a lot of hard work from the staff at the Land Trust for the Little Tennessee, a piece of property in downtown Franklin will go from being a potential environmental nightmare to a model example of restoration and redevelopment.

“We wanted to improve the area, but we didn’t think the opportunity would be available so quickly,” said LTLT Executive Director Sharon Taylor. “But our organization is in a perfect position to take the title of that property and it’s a win-win for everyone.”

Within six months of moving into its new office space on East Main Street in 2012, the LTLT staff learned that the property next door — Duncan Oil — was going into bankruptcy. They knew the abandoned gas station, which had been in business since the 1940s, had caused some ground contamination but didn’t know to what degree.

It was also known that there was potential for more environmental harm if that contamination reached the river that runs along side of the property. After a long conversation about what the brownfields project would entail, LTLT Associate Director Ben Laseter said staff decided such a project fit perfectly with the land trust’s mission.

It was also hard to ignore the project, given that the property adjoins LTLT’s property which is just across the street from the Little Tennessee River Greenway. It’s a growing part of downtown Franklin that could use some cleanup and revitalization efforts.

“We’re hoping it will help the area. This project alone can’t revitalize the neighborhood, but we hope it can start to perk things up and allow for some positive growth,” Laseter said.

With state and federal partners willing to assist in the process, LTLT started some initial testing on the property with plans to acquire the 1.5 acres. Getting a brownfields agreement through the North Carolina Department of Environmental Quality (formerly the Department of Environment and Natural Resources) brownfields program was a critical piece to the project. It took LTLT 17 months to get the agreement in place because of all the state assessments that had to be completed, but Laseter said the time was well worth it.

“The purpose of the agreement is to ensure that the property in question is cleaned up to the point where the public and the environment aren’t in jeopardy,” he said. “It also protects us or any future owners from liability.”

LTLT was able to secure almost $300,000 from the U.S. Environmental Protection Agency to fund the cleanup effort, which will start this winter. The project will involve taking down the gas station building on the property; removing contaminated surface soils; and addressing one area on the property where a former leak resulted in some pure gasoline seeping into the ground. Laseter said the area was restricted to a 10-foot area where contamination is sitting on top of the water table.

Since this type of work is new for LTLT, Laseter said geotechnical consultants with Martin & Slagle GeoEnvironmental Associates in Black Mountain were brought in to assist with the project.

So how does one extract petroleum-free contamination from underground? LTLT and consultants will be using the AFVR method — Aggressive Fluid Vapor Recovery. In simple terms, Laseter said a groundwater well with a 4-inch diameter will be put in the ground while a large vacuum truck hooks up to the well and releases vapors to suck up the free product.

The state brownfields program also applied for some supplemental funding from the EPA to do additional testing on the property this summer. Laseter said the good news that came out of that testing was that the underground contamination hadn’t yet reached the river.

“The petroleum would eventually be able to enter the river if we let it go, but I’m quite confident we’ll be able to do vapor recovery to remove or significantly reduce the amount of petroleum sitting on top of the water table so contamination won’t reach the river,” he said.

Once the cleanup is under way, Laseter said it shouldn’t take any longer than a couple of months to complete the AFVR process, which could be followed by a few more months of monitoring and testing to gauge the success of the extraction.

With 350 feet of river frontage on the Duncan Oil property, the LTLT has an opportunity to turn a contaminated site into a community asset. Once the cleanup is complete, LTLT can begin thinking about how to utilize the property. The organization plans to keep the property with preliminary plans to create another access point to the river.

Laseter said the access point wouldn’t be anything large scale but will allow pedestrians to walk down to the water. LTLT staff is now working to remove the invasive Japanese knotweed that is trying to take over the riverbank.

“The riverbank is vertical but we can slope it back and make a path that will allow pedestrians to get down to the water and we’ll replant the bank with native species,” he said.

A new driveway will go in to allow LTLT to have better parking and turn around access for employees and visitors.

At the heart of the project though is the ability to be able to educate people about the natural resources in the area through interpretive elements on the property about the river and the Nikwasi Indian Mound, which is 200 feet from the Duncan Oil property.

Nikwasi Indian Mound is one of the largest intact mounds remaining in Western North Carolina and may even predate the Cherokee. While there has been disputes over the ownership between the town of Franklin and the Eastern Band of Cherokee, Taylor hopes to mend some of those past clashes and bring all parties together in partnership to educate people about the mound.

“There’s so much cultural richness to this neighborhood and there are a lot of stories we can tell,” Laseter said. “For the first time we can bring school groups or whoever in for different educational programming.”

A couple of volunteer workdays have already been held at the site to remove trash and other debris before the real work can begin. Now it’s time for the experts to take over to clean up the tough stuff.

The LTLT recently held its first official event on the property to make a big announcement to the community. LTLT has changed its name to Mainspring Conservation Trust to more accurately portray its broadened mission. See the complete story on page 10.