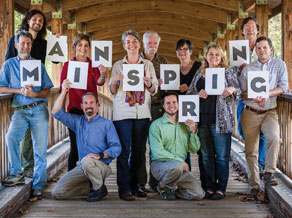 The Land Trust for the Little Tennessee has outgrown its name.

Since the trust formed in Macon County in 1997, it has built its reputation in Western North Carolina as a leader in protecting the Little Tennessee River, but LTLT has since expanded its project area and scope of work. LTLT now does work in the Hiwassee watershed, Tuckasegee River and even waterways across the state line in Rabun County, Ga.

When LTLT merged with the Little Tennessee Watershed Association in 2012, it broadened its mission to include water research and educational programming. While land trust projects will always be at the heart of what LTLT does, Executive Director Sharon Taylor said, the organization also works toward land restoration through its forest management program.

“We are the driving force for conservation in this area — it truly defines who we are,” Taylor said. “We’ll always do conservation, but our mission has changed.”

As the conservation organization’s goals have transformed through the years, Taylor said, it was finally time for its name to match its mission. She said the new name — Mainspring Conservation Trust — is more representative of the organization’s broad spectrum of work.

“For several years we’ve called ourselves a keystone organization in this area, and if you dig deep enough, a synonym for keystone is mainspring,” Taylor said. “Mainspring has been a defining word for us.”

The organization has been mulling over a name change since 2006 but began serious discussions in 2011. Changing the name and brand of a well-established organization is a difficult task — one the LTLT staff took very seriously. For months, employees brainstormed by writing potential names on a whiteboard in the office. Over time, some named would be crossed out and new ones added. Mainspring is the one that stuck and the one the LTLT board of directors approved in June.

Mainspring can mean many different things to different people, which was one of the things Taylor likes about it. It can bring to mind a primary water source or it can mean the principal spring that keeps the mechanism moving inside a pocket watch.

As it relates to LTLT’s work, Taylor said Mainspring is “something that plays a principal part in motivating or maintaining a movement, process or activity.”

Taylor said the acronym “LTLT” is only iconic to people who already know the organization and the success of its conservation efforts, but many times staff members have to explain to people what it stands for and how the name doesn’t reflect all they do.

“If there wasn’t a real need to have a name that reflects what this organization is now, I would be worried about losing the brand identity of LTLT,” she said. “Mainspring is a name that is not limiting and reflects our broader mission and project area.”

In other words, the downside of losing the LTLT brand identity should be more than offset by the growth of the organization’s conservation efforts in the Southern Blue Ridge region.

“I’m proud of the LTLT board for adopting this new identity. For years, we knew we needed to change our name so we were not associated with one specific river basin as our work expanded north and westward and our mission broadened,” said LTLT Board Chairman Chris Brouwer. “It is never possible to find that one name that satisfies everyone, but we think Mainspring defines the current organization and also will allow us to accommodate whatever changes the future will inevitably bring.”

Taylor said another plus to changing the name is getting rid of being known by an acronym. She hopes people will come to know them as Mainspring instead of trying to shorten the name to an abbreviation.

The most difficult thing about coming up with a new name was moving away from a geographic identity. While LTLT gave them a sense of place, that place is no longer an accurate distinction, according to Taylor. When seeking public and private financial support outside of the region, she said staff often had to take time to explain to potential donors that the Little Tennessee River was not actually in Tennessee. At the same time, landowners who could benefit from LTLT’s services didn’t realize those services were available to them if they were outside of that specific watershed.

Taylor wants the community to know this is a change in name and logo only — the organization will continue its mission to conserve land and water, promote a strong economy and smart growth, educate youth about the region’s natural resources and promote best forest management practices.

“It gives me hope to see the organization strengthening as a regional conservation organization, and part of that is embracing a new name that is as relevant in the valleys of the Tuckasegee and Hiwassee as in the Little Tennessee,” said Paul Carlson, LTLT’s founding director.

LTLT won’t legally become Mainspring Conservation Trust until Jan. 1, 2016, but work has already begun to educate the counties the organization serves. Three events have been held in Cherokee, Macon and Jackson to unveil the new name and explain it to communities.