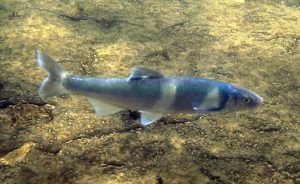 A federally protected fish has been found living in a tributary to the Little Tennessee River following restoration work this fall to provide easier access for minnows and other diminutive fish.

Not long after work was done to improve access through a culvert on Licklog Creek near the Swain County line, the spotfin chub was found swimming up the stream that feeds into the Little Tennessee.

The spotfin chub is listed as “threatened” under the Endangered Species Act. It’s typically found in only a handful of rivers in the country, one of which is the Little Tennessee. Its habitat is designated as the larger rivers it’s been found in, though, without any mention of the smaller creeks and streams that lead to these rivers.

“When it was listed, it was known as a large river fish,” said Jason Meador, citizen science manager at Mainspring Conservation Trust. “When they listed it, nobody looked in the tributaries. They said if you sample in the summer, they’re out in the big river and not in the tributaries. So their critical habitat was designated for the main stretch of the Little Tennessee between Lake Emory and Fontana.”

Bill McLarney, senior scientist with Mainspring, found that the critical habitat designation painted an incomplete picture of the fish’s habitat and movement patterns in this part of North Carolina.

“Bill McLarney was working on this in the fall of 2006, and lo and behold he’s finding spotfin chub swimming in these smaller streams in the fall,” Meador said. “That information came in too late to get the tribs protected.”

Spotfin chub and other minnows were found moving in and out of tributaries up and down the Little Tennessee during the fall, and several of these smaller waterways were obstructed by man-made barriers. In several locations, culverts had been installed that resulted in drop-offs of a foot or more that fish could not navigate, effectively blocking them from accessing the tributary. One such culvert is located on Licklog Creek, close to where it meets the Little Tennessee.

“We wanted to remove a barrier to allow any fish the ability to swim out of the river and into a smaller stream if they wanted to,” Meador said. “All we did was, from the short reach between the culvert and the river, we just placed rocks in small increments to raise the water level.”

The smaller increments allow fish to travel upstream and through the culvert without having to make an impossible 12-inch leap from a small pool into the mouth of the culvert.

Meador said there has been a concerted effort on Mainspring’s part to address these types of blockages for the past several years. The worst impediments, he said, are relatively easy to locate due to their effect on fish movements.

“We can identify barriers really easily, because the fish just pile up in a pool as far up as they can go,” Meador said.

By locating these dense concentrations of fish in small pools along the tributaries, Meador, McLarney and others can find places that have limited access and improve them. They’ve done numerous such projects in recent years, Meador said.

“We’ve identified quite a few of them in this area, and over the past few years we’ve been able to address most of those issues by working with landowners and fixing those problems,” Meador said. “Since 2010 or 2011 we’ve been working with private stream crossings to remove culverts and put in bridges. The remaining culverts are pretty much all owned by the DOT.”

While the spotfin chub acted as a catalyst for this project and several others, Meador said it’s not the only fish that will benefit from the improved tributary access.

“Spotfin is listed, so it gets a little more attention because it’s threatened. It gets the attention of funding agencies that way,” Meador said. “But there are at least three other fish that do the exact same thing, and we don’t know why but for some reason they’re all leaving the river to go up into these tributaries.”

According to McLarney, these access projects are just one part of a large number of efforts Mainspring and other groups undertake to improve stream health and conserve the species that use the various streams and tributaries along the length of the Little Tennessee.

“During all these years of monitoring, this little spotfin chub has assumed the role of teacher, showing us that, if we want to protect the Little Tennessee River, it is necessary to remove barriers to movement, shade our streams and otherwise care for our small tributaries,” he said. “It would be great in my lifetime to see the removal of the spotfin chub on the ‘threatened’ list because of the work we’re doing to save their habitat.”