Macon County abounds with walking, hiking, and biking trails. But not all offer cultural significance. Yet, a walk through Tessentee Bottomland Preserve, less than eight miles from Franklin’s Main Street, offers up a diverse nature experience but with plenty of historical elements as well.

Mainspring Conservation Trust, formed in 1997 as a land and waters restoration and conservation entity, acquired a 70-acre tract in 1999. This Little Tennessee Valley area – where Tessentee Creek joins the Little Tennessee River – is now preserved not only for its varied habitats but also because of the noteworthy history that occurred here.

Cherokee once thrived in the area, and the river valley was a busy trading route. Plus, the first battle of what became known as the “Cherokee Wars” is thought to have occurred at the site in 1760. Then, in 1775, famed naturalist and explorer William Bartram spent the night in a trader’s hut documented to be at “the foot of the Tessentee,” which is near or at the site of the present-day Tessentee Bottomland Preserve.

But the tangible history that still exists on the site is the remains of a white settlement dating back to the early 1800s.

Belinda Carringer, whose Carringer Farms’ fresh produce, honey, jams, eggs, and more are offered at the Saturday morning Franklin Farmer’s Market, knows the farm as that of her great-great grandfather’s. A 1912 black and white photograph was given by Carringer to Mainspring and is on display at the farmhouse. Taken in front of the house, the photo includes Whipple Carpenter Smart (1867-1946), his wife Mary Louise Silver (1871-1918), and their children, including Carringer’s grandfather, John Thomas Smart Sr., who sits astride a mule. (Interestingly, her great-grandmother’s death became a statistic of the historic 1918 flu pandemic that killed up to 100 million people globally, with at least 14,000 deaths in North Carolina.)

Surrounding the two-story wood farmhouse with rough-hewn porch posts is an outhouse, chicken coop, root cellar, and smokehouse. Farm equipment, including a seeder, exists on the property as well.

Carringer, whose maiden name is Smart and whose father was John Thomas Smart Jr., said she knew the farm existed, but her great aunt Emma Smart was unable 20 years ago to remember where. Carringer became passionate about finding it.

“I’ve been doing my genealogy for 25 years,” said Carringer. “We tried to find the old home place but my Aunt Emma couldn’t remember exactly where it was because she was getting very old.  One day, when my husband and I were walking on the Mainspring property, looking at all that they had done [for the Preserve], we stumbled across the old home place.  My Aunt Emma had told me the general direction of the home place, and I knew it was close by. She told me if I ever found a silo with an old house, that would be it. When we saw the house, along with the silo, I knew it was it. I got down on my hands and knees and cried. The house means so much to me, and I’m so thankful to Mainspring for restoring it.”

The area was originally known by settlers as Smithbridge Township, so named for the original owner, Samuel Smith, who acquired the property by state grant. The existing farmhouse dates from the 1890s and the farm was in operation as a dairy as late as the early 1990s, according to Mainspring’s research.

Further, an old wagon road once passed between the house and the root cellar.

Besides viewing the historic farm, visitors to Tessentee Bottomland Preserve have an opportunity to learn about various trees through educational ID tags; white oaks, black cherry, black walnut, sycamore, and black locust are some of the more common trees in either the wetter bottomlands or along the bluffs, but there are also some trees unusual to Macon County, such as blackjack oaks and shortleaf pines. A narrow foot trail from the parking area winds down through lily and daffodil beds that once surrounded a four-room cabin which was torn down in 2005. A spring feeds a meandering creek along the footpath. A stand of rivercane, which is one of North America’s three native bamboo species, is also there. Artisans from Qualla Arts & Crafts Mutual of the Eastern Band of the Cherokee harvest periodically the cane for crafting such items as baskets.

“It’s just such a unique piece of property with so many micro habitats in that small part of land,” said Mainspring’s Executive Director Sharon Taylor. “It’s a special place, with seven different soil types, 129 bird species, and 56 butterfly species identified so far. Getting outside and appreciating nature is so important. You go from one area to another on the Preserve and each part is so different.”

Taylor said she is encouraged that activities such as Migration Celebration, which helps children to understand the cultural heritage and natural resources of the area, are held at the Preserve.

“I love the fact that there are demonstrations held at the old house every year for school kids to come to see how things were in that era,” said Carringer. “Volunteers demonstrate things like basket weaving, bread baking, quilt making, etc. I have been asked to demonstrate there and I am looking forward to going and telling the school children that my ancestors owned this house.”

Although the doors of the home are locked because of needed repairs inside, Mainspring’s goal is to accumulate enough funding to restore the interior so that it can be opened to the public.

Tessentee Bottomland Preserve is open free to the public and located at 2249 Hickory Knoll Road.

Twenty-five years ago, representatives from the Tennessee Valley Authority, the League of Women Voters, the 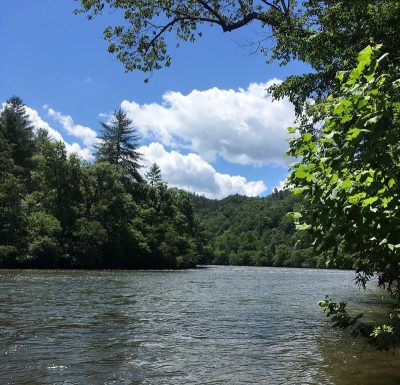 National Rifle Association and many more came together at the First Presbyterian Church in Franklin NC.

What brought this diverse group together?

The conservation of the Little Tennessee River watershed.  The watershed includes all streams and creeks that flow into the river starting in Rabun County, Georgia and flowing up through Macon and Swain Counties in North Carolina. The 27 miles of free flowing river between Lake Emory in Franklin and Lake Fontana near Bryson City supports one of the most diverse ecosystems of plants and animals in the Blue Ridge Mountains.

View or listen to the rest of the story here.

May 31, 2018 – Mainspring Conservation Trust received a $100,000 grant to continue its commitment to protecting and enhancing regional waterways and the environment. The grant is part of the Water Resources Fund, a $10 million commitment from Duke Energy.

Mainspring is one of 16 organizations across North and South Carolina to collectively receive more than $1.2 million in the seventh grant announcement. The Water Resources Fund is a multi-year commitment that will leave a legacy of improved water quality, quantity and conservation in the Carolinas and neighboring regions.

“This grant will help Mainspring restore an area that can be used for years to come by the citizens of Macon County,” said Sharon Taylor, Executive Director. “We thank Duke Energy for its support and are eager to launch this project so that we can continue restoring an important local waterway.”

The grant will help streambank stabilization and repair a riparian wetland on Cartoogechaye Creek near the Little Tennessee River Greenway in Franklin. Mainspring purchased the 16-acre property to work with the county to expand the popular recreation trail.

“Duke Energy is dedicated to protecting and restoring the rivers and waterways that power our regional economies,” said David Fountain, president of Duke Energy in North Carolina. “We look forward to our partnership with Mainspring and the impact this project will have in the region.”

Investment decisions are carefully reviewed by the Water Resources Fund committee, an independent body that includes five environmental experts and two Duke Energy employees. Selected projects are chosen on several criteria, including whether the project is science-based and research-supported.

Duke Energy anticipates two grant announcements per year over the course of the Water Resources Fund. Visit nccommunityfoundation.org for more information on how to apply and register for the session.